If Data Is Supposed to Be Our Guide, the Great Coronavirus Shutdown of 2020 Should End

According to the most widely cited model projecting the course of the coronavirus outbreak, today is supposed to be Oklahoma’s peak in daily deaths. Now is a good time to go back to the beginning of the Great Coronavirus Shutdown of 2020, review the goal of our policy, and assess our current status. If our policy should be “data-driven,” as we are constantly told, then let’s actually look at the data and determine our next policy steps accordingly.
Spoiler alert: according to the terms set out by those advocating for the shutdown policy, the policy’s continuance is no longer justified.
The stated goal of the shutdown policy was to “flatten the curve” so as to prevent hospitals from becoming overwhelmed with COVID patients. The fear was that the virus would spread so fast that at its peak, the number of cases would exceed the overall capacity of the healthcare system. If that peak could be stretched out over a longer period of time, lives would be saved. This concept was illustrated through a rather cartoonish graph. 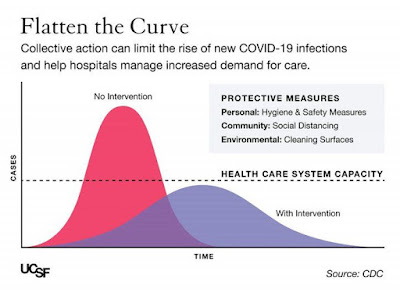 There were reasons to be skeptical from the beginning. The curve-flattening graphs rarely had any real numbers attached to them. Instead, a wide range of context-free numbers were tossed around by public health officials and in the media. The flatten–the–curve strategy also included some massive assumptions that policymakers seem to have accepted uncritically, or at least felt they did not have the time to examine closely. The dotted line that represents our “healthcare system capacity” should have been a red flag. What is this vague term even referring to? Does it include only hospitals? Just ICU beds? Will it fluctuate as the government surges resources and hospitals prioritize cases? None of these questions were answered, and from the outside, it appears they were not even seriously asked.
I will confess that my own skepticism of the shutdown policy included these questions, but was more focused on whether the graph-makers were drawing the dotted line too high, or overestimating the policy’s ability to bend the virus curve below it. That is, my concern was that we would undertake this massively disruptive and economically disastrous policy without any certainty that it would actually flatten the curve enough to prevent the overwhelming of hospitals. Assessing those certain costs against the highly speculative benefits of the shutdown, I was unconvinced. I feared we would have the worst of all worlds: a broken economy, lost liberty, and overburdened hospitals.
The opposite has transpired. In Oklahoma, we have never come close to our hospital capacity, and our curve has been basically flat. Our worst day so far saw just 18 percent of dedicated COVID ICU beds occupied by COVID patients. The Oklahoma Health Department reports these numbers every day, and from my review we have cumulatively had just north of 550 hospitalizations, with around 300 currently hospitalized. According to a recent report from a high ranking elected official, Oklahoma hospitals have 5,887 total beds, 991 ICU beds and 1,111 ventilators available for use by COVID-19 patients.
I do not wish to litigate here whether the shutdown policy was wildly successful at flattening the curve or whether it was wildly misconceived for the threat we actually faced. That is a very important debate to have, and I suspect 1889 Institute will contribute thoughtfully to it. I also suspect the reckoning will be ugly.
But it is important to note that some version of one of these two alternatives is correct. Whichever it is, the salient takeaway for Oklahoma policymakers should be that the threat our shutdown policy was implemented to prevent—indeed, the only thing offered to justify it—is not currently a threat. Hospitals are not overwhelmed.
If data is to be our guide, it’s time to end the shutdown.
Benjamin Lepak is Legal Fellow at the 1889 Institute. He can be reached at blepak@1889institute.org.
The opinions expressed in this blog are those of the author, and do not necessarily reflect the official position of 1889 Institute.