The “Unassigned Lands,” along with large portions of central and western Oklahoma, were purchased by the U.S. government from the Five Tribes in 1866 pursuant to treaties negotiated after the Civil War. The “Unassigned lands” were just that – never assigned. Thus, they were in the public domain and therefore eligible for settlement under the Homestead Act of 1862. The Land Run of 1889 was the means by which the U.S. government opened the area to settlement. The following is a (very) concise history of the “Unassigned Lands” culminating with the Land-Run of April 22nd, 1889.

In the period between 1830 and the Civil War, in accordance with treaties made pursuant to the Indian Removal Act, the Five Tribes (Cherokee, Choctaw, Chickasaw, Muscogee/Creek, and Seminole) were forcibly relocated to – and given possession of – vast portions of land in present day Oklahoma. The Cherokee tribe (about 20,000 people) was granted seven million acres in the northeast corner of present-day Oklahoma, as well as a large strip of land known as the “Cherokee Outlet.” The Choctaw tribe (roughly 15-20,000 people) was granted the entire lower portion of the state – essentially all the area between the Canadian and Red rivers, respectively. The Chickasaw (4-6,000 people) later moved into this area as well and eventually purchased a portion of it in 1855. The Muscogee/Creek (20-25,000) were granted the strip of land bounded on the North by the Cherokee land and bounded on the South by the Canadian River (the upper boundary of the Choctaw land). In all, the Five Tribes (approximately 70,000 people) lived on or had sole access to approximately 65,000 square miles of territory (almost 42 million acres, or about 600 acres per person).[1] 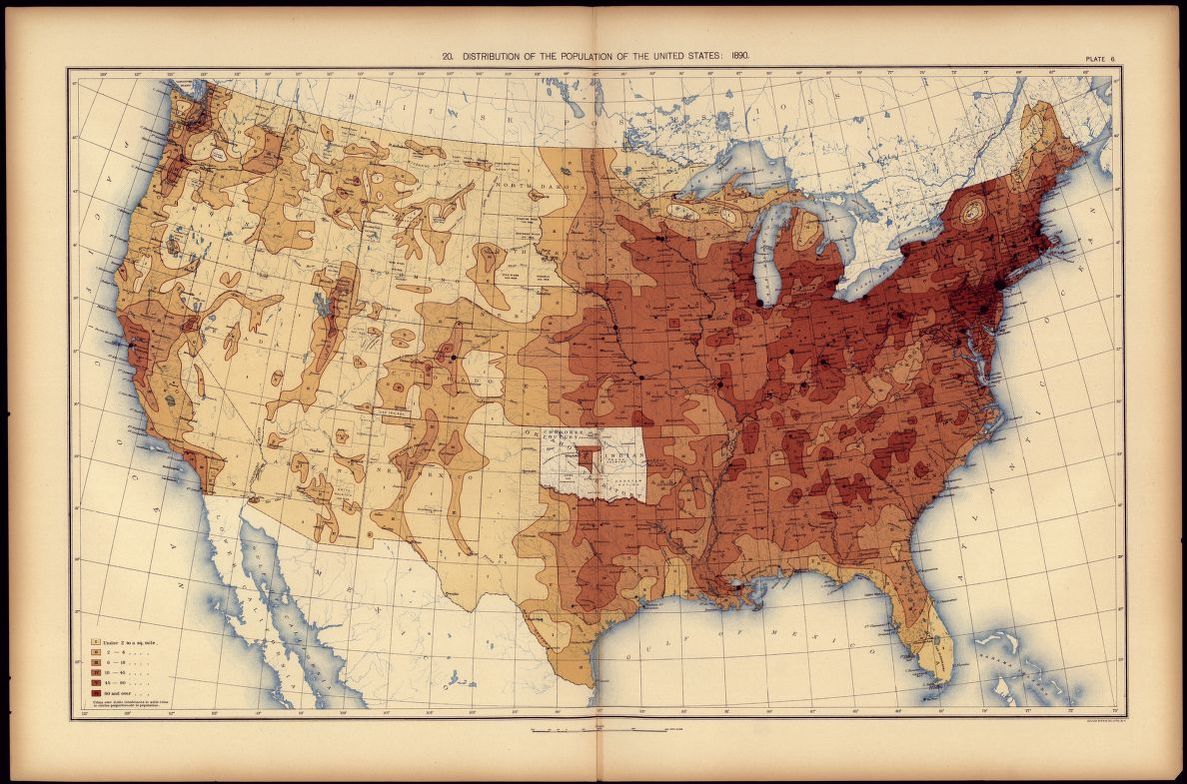 The dark, relatively densely populated area in Oklahoma follows the contours of the previously “unassigned lands.” All of Oklahoma would have been nearly white (extremely low density) but for the 1889 Land Run. Source: Library of Congress.

However, in signing treaties with the Confederacy and participating on that side in the Civil War, the Five Tribes abrogated their duties and annulled their original treaties with the United States. Thus, in 1866, the leaders of the Five Tribes were required to negotiate and sign four[2] new treaties, all with similar elements. Each tribe was required to fully end the practice of slavery and grant full tribal citizenship to their former slaves. In addition, some of the land originally granted to the tribes in the removal era was ceded to the U.S. government for a designated price, which varied from treaty to treaty.[3]

According to the new treaties with the Creek and Seminole, the U.S. government’s stated intention was to use the ceded land to “locate other natives and freedmen thereon.”[4] Accordingly, most of the land was quickly granted or sold to various tribes such as the Cheyenne, Arapaho, Kiowa, Comanche, Apache, Sac and Fox, and others as reservations. By the late-1870s, Congress had virtually ended the practice of Native removal/relocation to Oklahoma; however, there was still a large section of land in the center of the state (land-locked by tribes) that was unoccupied or “unassigned.”

Technically, these lands were in the public domain, which meant they should have fallen under the Homestead Act of 1862 and been open for settlement.[5] This was most notably pointed out by a prominent Cherokee named Elias C. Boudinot in a letter written to the Chicago Times in 1879. Boudinot was a progressive when it came to tribal traditions on communal land use/ownership – which put him in the bad graces of many tribal members – and believed that opening the land was the quickest way toward a more prosperous economy. In addition, due to an unfavorable Supreme Court ruling involving his tobacco business, he believed that tribal members would benefit from U.S. citizenship, with full Constitutional protections, rather than the oft-shaky protection offered by treaties.[6]

Boudinot’s letter sparked immense discussion, and the question of what to do with the “unassigned lands” soon became a hotly contested one. Some cited the treaty stipulation that the land be used only for native re-settlement as reason to keep it closed. Others maintained that since it was unassigned, and would likely never be assigned, it was legally required that it be opened for settlement. However, due in large part to the lobbying power of the cattle industry, the legal question was officially left unanswered and the land remained strictly off limits to settlement. The unassigned lands were prime grazing land and the cattle barons who were quasi-legally using it resisted giving up the resource.[7]

David L. Payne, the so-called father of the “Boomer” movement, read Boudinot’s letter and was convinced that the land should be open for settlement. Payne decided to make excursions into, and settlements on, the unassigned land in order to force the U.S. government to give a legal decision on its status for settlement. Unfortunately for Payne, the U.S. government had no interest in hearing the issue in court. He made dozens of excursions but he and those with him were repeatedly apprehended by the U.S. Army, thrown out, and not given their day in court.[8] Payne finally got a favorable ruling from a U.S. District Court judge in Kansas in 1884, but unfortunately for Payne, the U.S. government chose to ignore the ruling and continued to expel anyone who attempted to enter. [9]

It was not until after Payne’s death that the tide turned. Directly following Payne’s death, the Boomers intensified their Congressional strategy in attempting to get legislation passed regarding the status of the land for settlement. In addition, the cattle industry and its lobby were greatly weakened after the extremely harsh winter of 1886-87, known as “The Great Die-Up,” in which massive numbers of cattle froze to death. This crippled the cattle industry, hindering their ability to affect legislation regarding settlement.[10]

What truly opened the door for settlement, however, was a proposal from the Creek Nation to relinquish any claim or title they had to the land ceded in the 1866 treaty. This proposal was delivered in January 1889 by Pleasant Porter, Creek delegate to Congress, who would later become the Principal Chief of the Creek Nation.

Porter, and a good many other Creeks, believed that non-native settlement of the land was inevitable. Thus, they decided to negotiate before the tide of settlement became uncontrollable. Porter, like Boudinot, also believed U.S. citizenship would better serve the tribes in the long run. It was to this end that he worked until his death in 1907. “It was his ambition that his people might assume their place as full participants in the glory of United States citizenship. His last efforts were directed toward seeing them invested with the high privileges of statehood and self-government.”[11]

The U.S. government quickly came to an agreement with Porter’s delegation. The Creek would renounce all claim and/or title to the land ceded in the 1866 treaty, which included the Unassigned Land, for the sum of $2,280,857.10 (roughly equivalent to $209,711,135 today).[12] Shortly after, a Seminole delegation approached Congress with an almost identical offer to relinquish their claim to the land ceded in 1866. To be clear, the U.S. government was not purchasing the land; they had already done so in 1866. The agreement and payment were deemed necessary to remove the stipulation that the land be used only for native re-settlement.[13] With that issue resolved, there was no question that the land was in the public domain and eligible for settlement. The so-called “Springer Amendment” was quickly added to the Indian Appropriations bill of 1889 to authorize the President to issue a proclamation declaring the Unassigned Lands open to settlement.[14] Newly elected President Benjamin Harrison subsequently issued a proclamation that specified “[the] hour of 12 o’clock noon of the 22d day of April, A. D. 1889,” when the Unassigned Lands would be open for settlement.[15]