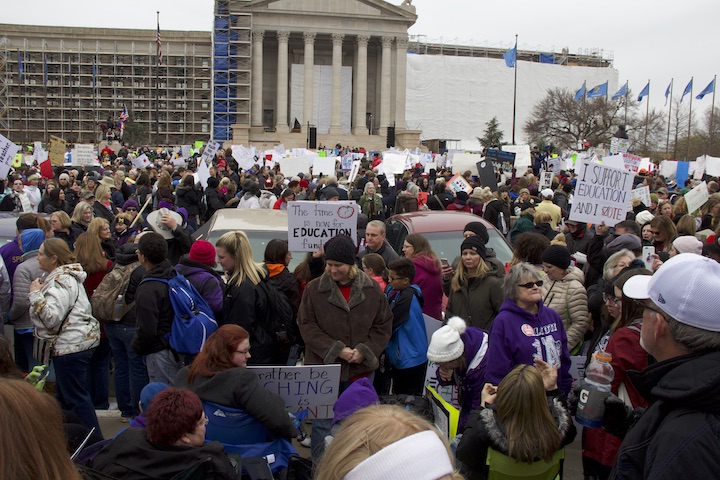 [Collective bargaining] “cannot be transplanted into the public service. The very nature and purposes of government make it impossible for administrative officials to represent fully or to bind the employer” because “the employer is the whole people, who speak by means of laws.”

Collective bargaining by government employees is fundamentally at odds with self-government because it robs the people of their sovereignty over government. Public sector unions displace voters’ control of their government, operating as politically powerful special interest groups with the ability to dictate to the government what are, at bottom, political questions. This is possible because government exercises monopoly control over the services it provides—education, law enforcement, firefighting, and the like—so when employees unionize, they gain the power to hold the public hostage through the denial of these essential services. The dynamic—a political one—is fundamentally different from collective bargaining in the private sector, where the power of a union is economic in nature and unionized firms generally do not possess monopoly power.

Unsurprisingly, public sector unions regularly wield the powerful political weapon they’ve been handed. Through threats, strikes, and traditional political activity, public sector unions punch above their weight in Oklahoma politics. The most powerful of Oklahoma’s public sector unions, those representing teachers, are large contributors to candidates and carry much sway over the political process. A teacher strike in 2018 produced record tax increases and pay raises for union members. Legislators who refused to go along with the unions’ demands were unseated, while the threat of a similar fate continues to constantly hang over the elected officials who survived the union onslaught. This, from a group that claims fewer than 20,000 members in a state with a population some 200 times that number. Regardless of one’s view of the underlying substantive issues at stake, it is undeniable that the unions dominated the political fight.

Before the middle of the twentieth century, government-employee unions were nearly inconceivable. Despite the Progressive-era rise of organized labor, public employee unionism was widely discredited by the chaos of the 1919 Boston police strike. That strike led to rioting and looting, and turned then-governor Calvin Coolidge into a national figure when he broke the strike. Coolidge’s oft-quoted line, “there is no right to strike against the public safety by anybody, anywhere, any time,” encapsulated public opinion.[1] President Woodrow Wilson—otherwise an erstwhile ally of organized labor—went further, calling the strike “an intolerable crime against civilization.”

Union stalwart Franklin Roosevelt also rejected government employee unionism. In a letter to the Federation of Federal Employees in 1937, he asserted that collective bargaining “cannot be transplanted into the public service. The very nature and purposes of government make it impossible for administrative officials to represent fully or to bind the employer” because “the employer is the whole people, who speak by means of laws.”[2]

Each of these criticisms acknowledge the fundamental reality that public sector unions undermine popular sovereignty. The will of the people is expressed through the actions of the government, which can only be achieved through its employees. If an unelected—and therefore democratically unaccountable—organization can compel the government to act by robbing it of the employees it needs to do the people’s business (i.e., by striking), then that organization is the true sovereign.

In recognition of this principle, the National Labor Relations Act of 1935 gave private-sector unions the power to compel employers to bargain, but excluded government unions. It declared that federal, state and local governments were not “employers” under its terms.[3]

Likewise, several states outright prohibit collective bargaining in government, and a substantial majority of states, including Oklahoma, have laws on the books seeking to ban public employee strikes.[4] The more effective policy is to prevent government employees from organizing in the first place. As seen in Oklahoma, anti-strike laws are of varying effectiveness. Oklahoma’s, for example, is essentially meaningless. While it could be improved, the more effective policy would be to make it unnecessary by eliminating public sector unions in the first place.

The most effective way to prevent public sector unions from hijacking the government is to make it illegal for public officials to enter into collective bargaining agreements. Officials of the state and its subdivisions are the necessary party to any collective bargaining agreement, and are directly within the control of the government, so it makes more sense to proscribe their conduct than to attempt to regulate the unions. A law that seeks to regulate the joining or forming of a union (i.e., the conduct of private actors) would suffer the same failures as Oklahoma’s anti-strike law—motivated unions would find a way to circumvent the law. Far better is to place the restriction on government officials.

The approach described above has succeeded in other states. Texas law, for example, simply makes it illegal for any state or local official to enter into a collective bargaining agreement. As a result, Texas school districts are not hamstrung by teachers unions. While unions still exist, they resemble something closer to a voluntary trade association than a government-sanctioned union with outsized political power. In this way, they are no different from any other advocacy organization—they have a voice in the political process, but the government itself does not put a thumb on the scale in their favor. Notably, Texas teachers are paid better than their peers in other states, and Texas schools outperform many other states’ public schools. There has not been a single teacher strike in Texas since the law was passed in 1993 (incidentally, at a time when nearly every state office was held by a Democrat and both houses of the legislature had Democrat majorities).[5]

The Texas collective bargaining law does have a flaw, however: it exempts police and fire departments from the prohibition. There is no principled reason for such an exemption, but rather is likely the result of political compromise. Some argue that due to the inherently dangerous nature of the jobs, permitting unionization makes more sense for law enforcement and public safety workers than for other government workers. There is little evidence that this is true. There is no evidence that non-union police and fire departments experience worse safety records than union shops. There is, however, ample evidence that police and fire departments across the country are beset by the same destructive dynamics that exist in other unionized government workforces. Bad employees are difficult to discipline and terminate, pay is based on seniority instead of merit, and public sector management is often subservient to, not supervisory of, the unions.

Oklahoma has been a “right-to-work” state since the 1990s, which leads some to assume that the landmark ballot question fixed Oklahoma’s union problem. While right-to-work is no doubt good policy and important, it only addresses part of the union problem. Right to work concerns an individual employee’s right to avoid compelled membership in a union. The problem is that what distorts the policymaking process in Oklahoma is the immense political power wielded by public sector unions, power these organizations would not have if not backed by the monopoly provider of essential services, government at the state and local levels. Therefore, Oklahoma’s government employee unions will continue to frustrate the public’s collective right to control its government until they are defanged. That is, the only way to solve Oklahoma’s public sector union problem is to stop the government from putting a thumb on the unions’ side of the scale.

[2] Franklin D. Roosevelt, “Letter on the Resolution of Federation of Federal Employees Against Strikes in Federal Service,” The American Presidency Project, https://www.presidency.ucsb.edu/node/208681.

[4] Melissa Maynard, “Public Strikes Explained: Why There Aren’t More of Them,” Pew Stateline, Sept. 25, 2012, https://www.pewtrusts.org/en/research-and-analysis/blogs/stateline/2012/09/25/public-strikes-explained-why-there-arent-more-of-them (reporting that 39 states, in some form, prohibit striking by public employees).