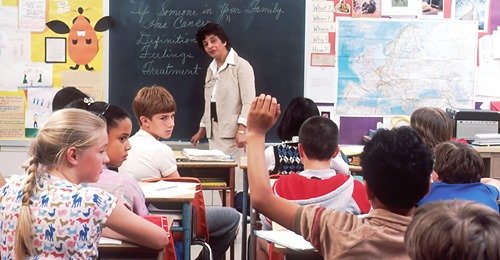 Kent Grusendorf argues that past reform efforts have not succeeded due to their top-down nature. Instead, what is needed is to take account the efforts of those who are actually doing the work, teachers. It proposes a reform to publicly reimburse the best teachers who can show the financial wherewithal to establish their own educational practices as professional education practitioners.

This is a brief preview of the information in the upcoming book, Saving Public Education, by Kent Grusendorf

President Trump has declared war on the invisible enemy called Covid-19. This new war requires different weapons than normal wars. Instead of using lead to separate us from our enemy, we are asked to separate our bodies from other bodies through social distancing. The idea is to starve the enemy by limiting its ability to grow and expand its reign of terror. A parasite can only grow and thrive if it has a host to thrive upon.

Speaking of battles, Americans have strived to reform their public education system for well over half a century. Presidents Eisenhower, Kennedy, Johnson, Nixon, Ford, Carter, Reagan, H.W. Bush, Clinton, Bush, and Obama have all promoted improved public education. Virtually every governor elected in the past 50 years has also promoted some form of education reform. Many politicians have not only campaigned on education reform agendas, they have even declared victory in some instances.

Reform has also been front and center in the halls of academia. School superintendents, education professors, principals, and school administrators have promoted a constant stream of reform agendas. Ideas like: Common Core, Block Scheduling, Open Classrooms, Merit Pay, Equity, No Child Left Behind, Standards Movement, Accountability Movement, Governance Movement, Outcomes Based Education, High Stakes Testing, Consolidation, Ebonics, Multiculturism, Whole Language, etc., etc. Many of these reform programs have been promoted as enlightened ideas that will lead to the salvation of public education. Meanwhile, teachers have become frustrated as they are pushed from one fad to another, and as their superiors attempt to promote and enact the latest new reform proposal.

Whereas the teacher in the one-room-schoolhouse was in total control and exercised common sense, today rules determine almost everything. Education reform has been sort of like a virus. The bureaucracy grows on its host. Past reform efforts have required greater oversight, thereby taking money, which should be used in the classroom, and instead spending those funds on unproductive overhead. Over the past half century school administrative growth has increased by over 700 percent.

In a battle, or war, resources must be used wisely to avoid defeat. In Word War II the Germans ran out of gasoline and their tanks stopped running. Failure to allocate resources effectively always will lead to potential defeat. Education resources in America are neither being used efficiently nor effectively.

Today, taxpayers’ money is taken from them and given to school administrators who determine how to divide the money. That is upside down. Whereas classroom supplies are often is short supply, the central office is usually well staffed and well equipped. School administrators take what they need and send what is left over to the classroom. The teacher and classroom should be funded first, and they should determine what support staff is needed.

In America we spend about $4 billion every school day on public education. We spend about $350,000 per classroom of 25, yet only pay the teacher about $60,000. Considering the fact that education occurs in the classroom, not in the central office, that ratio is indicative of the fact that the classroom effort in America is greatly undervalued. Many people who are funded, directly or indirectly, by public education profit more from the system than do teachers.

Using inflation adjusted dollars, real spending per student has increased by almost 40 percent over the past three decades. However, over the same period of time teacher pay, also adjusted for inflation, has actually decreased while spending for non-teaching staff has increased. Our priorities are wrong.

Teachers are the foot soldiers on the education front, yet they are greatly undervalued by the current system. That was not always the case. Teaching in the late 1800s and early 1900s was actually viewed as a true profession. Entire communities recognized the teacher as the professional in charge of educating their children. The teacher made virtually all education related decisions. No federal or state bureaucrat told them what to do, and no local administrator was looking over their shoulders telling them how to practice their trade. Additionally, almost 100 percent of what was spent on education was used for teacher pay. Today, if 100 percent of education spending, not counting facilities cost, went to teachers, they would earn about $250,000 per year. Yes, our priorities are wrong.

So, how do we get our priorities right? First, we must evaluate the facts. Next, we must learn from history, and finally, we need to implement a plan of action that will deliver the desired result.

Where are we, what are the facts?

The fundamental purpose of public education is to deliver a general diffusion of knowledge to our youth. Yet today, despite decades of emphasis on equity, achievement gaps across ethnicities is totally unacceptable. According to the Brookings Institute there has been no improvement in literacy in the past 50 years, and no progress in math in 30 years. Achievement levels for our poorest students are three or four years behind their wealthy counterparts. Far too many of our high school graduates require remediation once they enter college, and American students rate 37th in math, out of 78 industrialized nations. Although the goal of The No Child Left Behind act of 2001 was to have every child performing at grade level by 2014, three years after that target date 83 percent of California’s African-American students failed to meet standards. This is a problem in many other states, especially in major metropolitan areas.

We also know that politicians at all levels have attempted to reform education for decades. As noted earlier, we know that spending has increased significantly, and that administrative staff has exploded in size. We know that most reform efforts have been top-down mandates imposed on educators from above.

Just as the battle to defeat the Covid-19 virus requires a new approach, success in the battle for educational progress will require a new approach. Just as we separate ourselves to avoid the spread of the virus, we need to separate politics from education to improve public education.

We must set teachers free to teach.

What makes a professional? Doctors, lawyers, accountants, engineers, and other professionals can go into private practice. However, that is not a practical alternative for most teachers due to the structure of public education today.

The cornerstone of an efficiently organized education system would be to actually empower teachers with the opportunity to creatively meet the needs of their individual students. Instead of being required to follow the orders and mandates from those far removed from the classroom, the goal should be to empower teachers to practice as true professionals.

We should allow qualified teachers to go into private practice just as do qualified doctors and lawyers. Every state should adopt policies to allow those qualified public school teachers who wish to go into private practice to do so. This can be achieved by allowing the money to follow the child. We should also provide greater latitude to public schools along the lines provided to charter schools. The entire education system can be improved significantly by simply allowing such freedom to customize education to the needs of individual students.

Every state should adopt a Professional Teacher Act. The professional teacher concept would allow public school teachers, only after they have proven themselves to be effective, the option to actually go into private professional practice with funding following the child.

In order to maximize innovation and efficiency, teachers who go into private practice should be subject to only those rules applicable to private schools. However, the state should not be placed at any financial risk if the private practitioner fails.

Just as a doctor, lawyer, accountant, or engineer would have property rights and own their practices, teachers could now own their professional practices. Ownership brings with it pride and the ability to build equity. Ownership is a very powerful dynamic. However, just as a doctor, lawyer, or other professional must provide start-up funding in order to go into private practice, teachers who start their own practices should finance their own start-ups.

Therefore, in order to receive a professional charter, the teacher, or group of teachers, would need to show proof of financial ability to operate the academy for a full school year. The state would only reimburse the professionals after completion of the full school year.

Teachers who choose to start their own academies would benefit from such alternative directly, while those who remain in the traditional system would also be rewarded indirectly through improved pay and working conditions at traditional schools due to increased competition for teachers in a more competitive teacher market. As some teachers start to take advantage of this new alternative, school administrators will also have an incentive to make better decisions regarding allocation of scarce resources. Such decisions might include fewer administrative staff, better working conditions, greater professional latitude, reduced administrative hassle, more or better classroom supplies, improved fringe benefits, and enhanced pay.

Some might contend that this is just another school choice, or voucher proposal. It is not. Instead, this is a teacher choice program. The professional teacher concept would be limited only to public school teachers. Public school teachers, who have proven themselves to be effective, would be the only people qualified to start, own, and operate a Professional Academy. This program simply provides a truly professional alternative for good teachers.

Once the money held in trust for students is allowed to follow the child, there is no limit to the creative methods by which teachers and students, with parental oversight, can work together to achieve greater results for our overall society. This can be achieved while at the same time significantly elevating the entire teaching profession and the entire public education system.