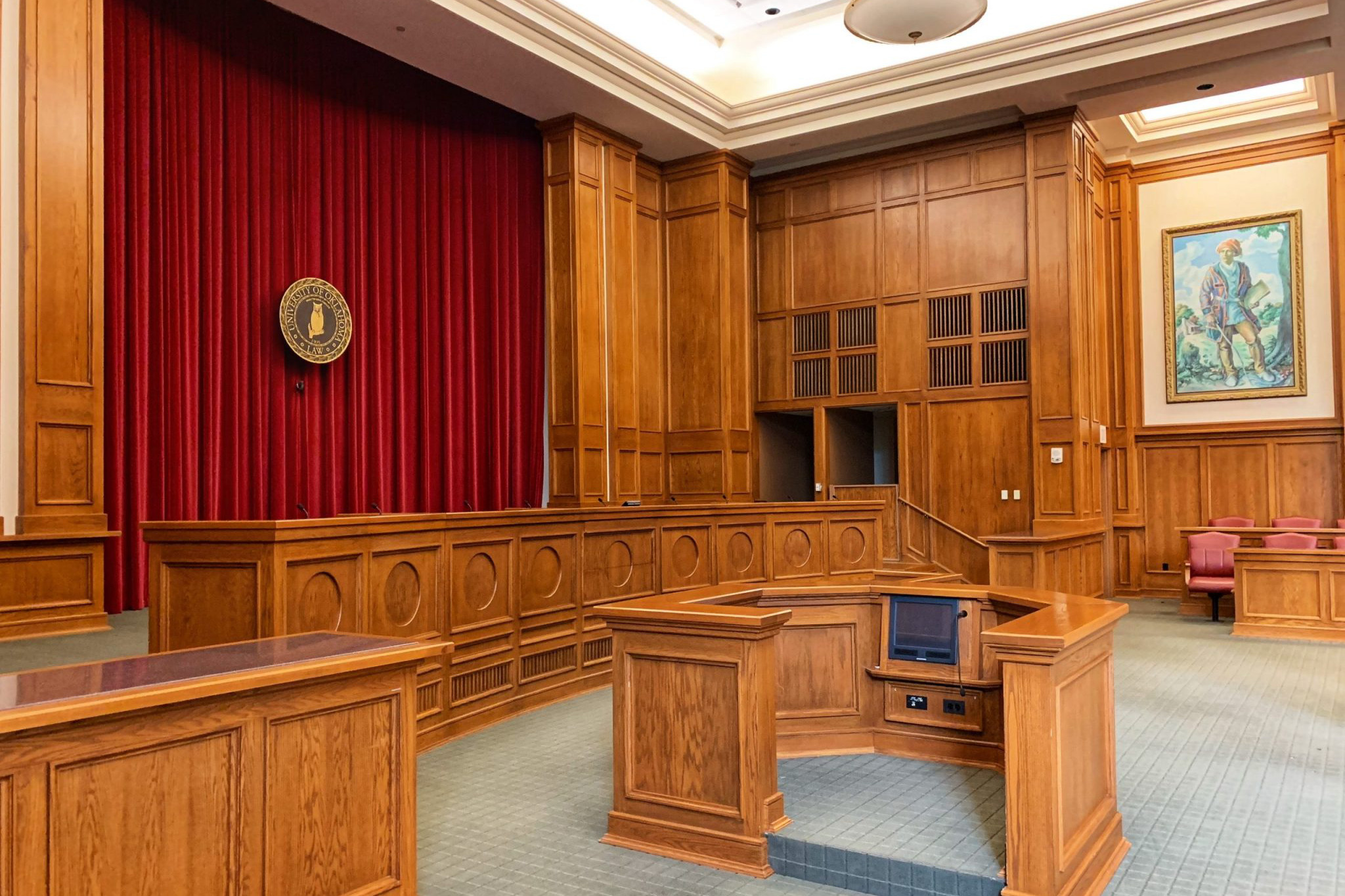 This paper lists and explains 12 measures (plus one bonus measure) that the Oklahoma Legislature can enact on its own to help bring Oklahoma’s courts, which have been usurping legislative power, to heel.

The Oklahoma Legislature can do much to address the judicial activism described in 1889 Institute’s recent publication, Legislators in Black Robes: Unelected Lawmaking by the Oklahoma Supreme Court. The Oklahoma Supreme Court too-often departs from its proper role as an interpreter of the law and instead encroaches on the legislative power by making law. While a constitutional amendment changing the state’s judicial selection system is needed, the following is a menu of reforms—large and small—the Legislature can enact by statute.

1. Reform: Eliminate the Judicial Nominating Commission’s role in filling vacancies for all courts below the Supreme Court, and replace with appointment by the Governor subject to confirmation by the Legislature (Amend 20 O.S. § 30.17).

Explanation: Vacancies for the Court of Civil Appeals and district courts are processed through the JNC, but since this was established by statute it can be undone in the same manner.[1] Instead, Oklahoma should adopt a process akin to the federal system for vacancies in all courts except the Supreme Court and Court of Criminal Appeals, where the JNC has a constitutionally mandated role.[2] To avoid delay when the Legislature is not in session, confirmation could be given to a joint House and Senate committee with authorization to meet whenever necessary. Confirmation should be automatic if a vote is not held within ninety days after the nomination.

2. Reform: Remove the Oklahoma Bar Association (OBA) from the process of selecting the JNC’s lawyer members (Authorized by Okla. Const. Art 7B, § 3).

Explanation: This reform takes aim at the most pernicious aspect of the existing system—that a trade group representing lawyers with a professional and financial interest in which judges hear their cases plays an outsized role the selection of those judges. Ideally, the JNC’s lawyer members would be appointed in the same manner as the nonlawyer members (by the Governor and legislative leaders). Minimally, the Legislature should impose transparent election procedures for the JNC that eliminate the OBA’s involvement in the process.

Presently, the voting is entirely controlled by the OBA and subject to no outside oversight or even common election integrity protections. The district in which an OBA member votes is determined by where he receives his bar journal, which can be changed online at any time. The OBA sets the requirements for getting on the ballot, sets the election dates, and counts the votes. The State Election Board is not involved, nor is any other public official. In sum, the OBA-operated elections are more akin to the way a trade association or private club would select its leaders than to state-run elections for important government positions.

Explanation: The Oklahoma Court of Civil Appeals is a statutory creature.[4] As such, it can be re-organized via statute. Currently, all appeals from the trial courts go directly to the Supreme Court, which then either retains the appeal or assigns it to the Court of Civil Appeals. Compare this to the federal courts, where the US Supreme Court only agrees to hear a select few of the most important cases, and usually only after the legal principles at stake have been thoroughly debated in the lower courts and by legal scholars.

Oklahoma’s unusual appellate procedure short-circuits this type of deliberative process. It involves the Supreme Court in many cases that should never make it to that high level. The high court should only hear cases after they have been heard, briefed, and decided by the intermediate appellate court (Except when the Supreme Court has original jurisdiction). The Legislature should mandate that appeals mimic the federal court system, where appeals from the trial courts go first to the intermediate appellate court and then only to the Supreme Court if it grants certiorari. This restructuring of appellate procedure would also help to address the lack of a Supreme Court docket described in Reform Number 12, below, as court-watchers could track cases that are granted certiorari.

Explanation: The JNC conducts its important job entirely in secret; not even the members’ votes are made public. The public cannot monitor the process, even to evaluate whether the JNC is meeting its basic responsibilities, such as making sure the candidates meet age and residency requirements. In fact, for the most recent Supreme Court vacancy (filled September 2019), the JNC advanced a candidate to the Governor who does not appear meet the residency requirement.[5] Perhaps the candidate provided sufficient proof of residency to the JNC, but the public is unable to determine whether the JNC even inquired as to this basic qualification for office. This complete lack of transparency exists nowhere else in state government and is in need of sunlight.

5. Reform: Ban lobbying of the Legislature by members of the Supreme Court and employees of the Administrative Office of the Courts (New law reinforcing Okla. Const. Art. 4, § 1).

Explanation: This is a matter of institutional self-respect. The Legislature should make clear to members of the judicial branch they have no role in the lawmaking process. A narrow exception could be made for sharing budgetary information or testifying at legislative hearings when invited, but fundamentally the Court is supposed to interpret law, not help make it.

Explanation: The Legislature should statutorily define standing to sue as it has been traditionally understood, and explicitly roll back the Court’s recent application of so-called public interest standing. This judicially created doctrine has little basis in law or Court precedent and gives the Supreme Court more opportunities to strike down valid legislation. The statute would limit standing to cases where a plaintiff (1) has a concrete and particularized injury that is not conjectural or hypothetical, (2) his injury is fairly traceable to the actions for which he sues, and (3) his injury will be redressed by a favorable decision from the court. Public interest standing should be explicitly restricted to cases where the party challenging the legality of government action is the actual object of the action, restoring the narrow standard of previous Court precedent.[6]

8. Reform: Add “improperly exercising the powers of the legislative branch” as a ground for impeachment of a Supreme Court justice (Amend 51 O.S. § 51, et seq).

Explanation: This would send a message to Supreme Court justices—even without actually impeaching anyone—that their legislating from the bench is not without consequence. There are generally four ways to check the Supreme Court when it oversteps its authority on constitutional issues: (1) through the power of the purse; (2) through constitutional amendment; (3) through the appointment power; and (4) through impeachment. This reform would make clear that impeachment is not just reserved for ethical misconduct or criminal wrongdoing while in office, but is fundamentally a tool to enforce the separation of powers.

Explanation: The longest-serving justice on today’s Supreme Court was appointed 35 years ago. Justices effectively enjoy life tenure due to Oklahoma’s unusual system of judicial retention elections (no justice has ever been voted out of office). The constitution, however, permits the Legislature to set a mandatory retirement for justices based either on their age, years of service, or both.[9] The Legislature should limit justices to 12 or 18 years (2 or 3 terms) of service on the Supreme Court, after which retirement would be mandatory.

10. Reform: Require additional information to be reported by the judicial branch annually for purposes of oversight (Amend 20 O.S. § 16.11).

Explanation: An Oklahoma statute already requires the Administrative Director of the Courts to submit an annual report to the Legislature including mundane details about the court system such as caseload of the lower courts.[10] This statute could be amended to require an annual report containing more useful information, such as listing each instance of the Supreme Court invalidating a state law in the preceding year, each case in which a special justice was appointed, and details about the agency’s management of the JNC.

Explanation: Supreme Court justices are exempted from the Open Records Act (ORA),[11] but it is not clear this is necessary to the performance of their duties. Any legitimate argument or direct influence over justices’ decision-making in cases is done through public filings by the parties and their attorneys. Typically, a public body (like the Legislature) is only exempted from the ORA when there is a need for private advice and counsel or where sensitive information, such as an ongoing law enforcement investigation, is involved. Neither is present in the typical work of the Supreme Court, at least not more so than in other state agencies that are subject to the act. Why, for example, should a Supreme Court justice’s emails be private while the Governor’s are subject to public disclosure?

Explanation: Incredibly, the Oklahoma Supreme Court does not publish a docket of upcoming cases it will hear. This is partly related to Oklahoma’s lack of a true intermediate appellate court, but cannot be solely blamed on the structure of the courts. In the federal court system, the Supreme Court only agrees to hear a select few cases each term, so when it grants certiorari it publishes a docket of the cases it will hear in the coming term. Oklahoma’s Supreme Court meets year round, so it does not have terms with beginning and ending dates. All trial court appeals are funneled through the Supreme Court on a rolling basis, so it would take slightly more effort to compile a docket than is required at the federal level. But not significantly more effort.

This is not just a matter of transparency, but inhibits the ability of the legal profession to intelligently comment on developing issues in the law, depriving the Court of the robust debate that exists at the federal level. It also limits amicus briefs which could provide the Court with perspectives not presented by the parties to cases. The Legislature should require the Court to publish an easily accessible docket and should use the Court’s funding as leverage to make sure the Court complies.

If—and only if—significant reforms as described above are implemented, the Legislature should increase the salaries of Supreme Court justices and Court of Civil Appeals judges. Appellate court salaries could be pegged to those of federal judges, with Supreme Court justices paid the same salary as US Tenth Circuit judges and Court of Civil Appeals judges paid the same as federal district court judges in Oklahoma. This would represent a significant pay increase but would ensure that the state courts are competitive in attracting the best talent to the bench.