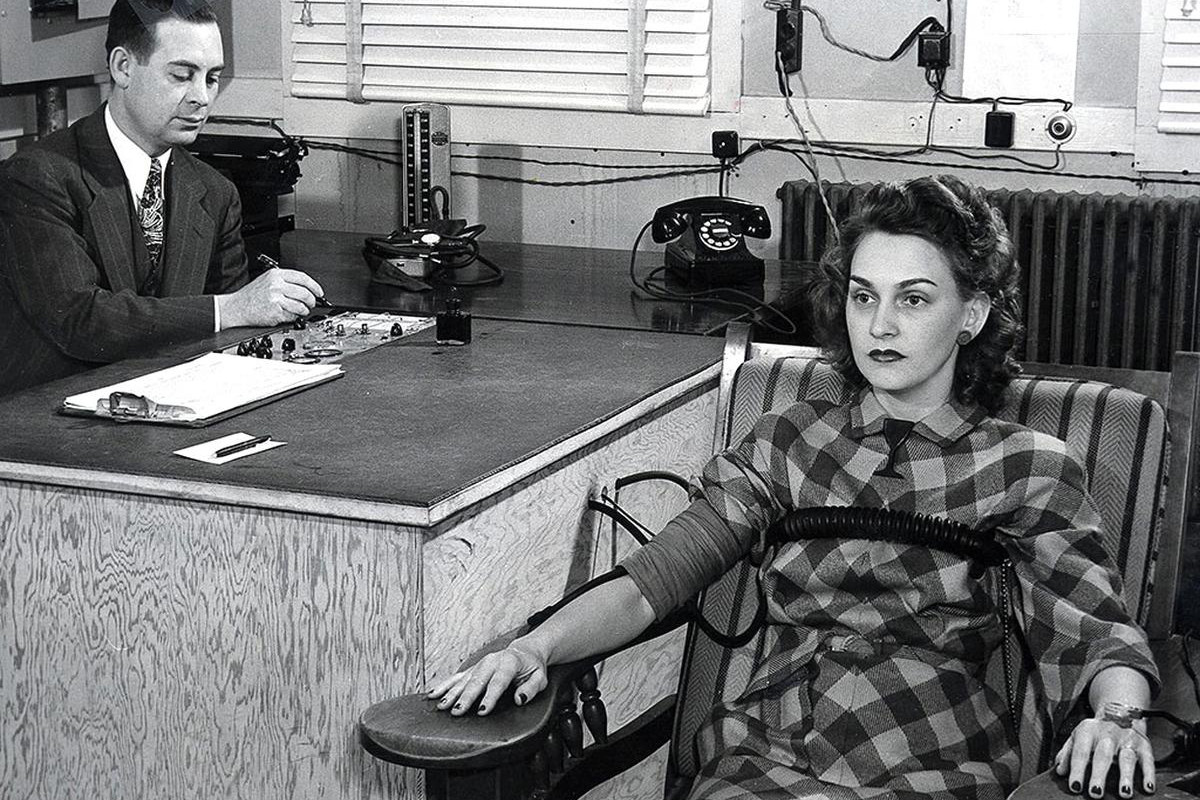 Polygraph examiners use instrumentation (a polygraph or “lie-detector test”) to detect deception in individuals.[1] Lie-detector tests are administered by asking questions of examinees and monitoring their autonomic activity (heart rate, blood pressure, breathing, and sweating) as they respond. If an examinee experiences autonomic arousal (such as increased sweating) while responding to a relevant question (for example, “Did you kill your wife?”), it is inferred that the examinee is lying (or otherwise being deceptive). Oklahoma law requires that anyone who wishes to bear the title of polygraph examiner be licensed by the state. Twenty-three states do not license polygraph examiners.[2] That fact alone is reason enough to question whether it is actually necessary to license the industry.

The Polygraph Examiners Act authorizes a Board to manage the licensure of the occupation. The Board has five members, all of whom, by law, must be practitioners. Every Board member must be in current practice, but at least two must be employed by a government agency, and at least two must be employed privately. Board members are appointed by the governor and serve six-year terms.

To obtain a license, an applicant must: (1) be 21 years old, (2) have never committed a felony that substantially relates to the occupation and reasonably threatens the public, (3) have a bachelor’s degree or higher OR have five consecutive years of experience in investigative law enforcement, (4) graduate from a polygraph examiners course, (5) complete a six-month internship, and (6) pass an exam.

The Board exists “to protect the public” and “to ensure that polygraph examiners maintain professional standards”.[3] However, do each of the above rules and regulations actually benefit the public by either guarding against bad practice or by ensuring quality service?

It is not obvious why license applicants face such stringent barriers to entry. An applicant must have a four-year degree (unless he has five years of investigative experience). On average, four years of public-university costs almost $80,000.[4] Monetary concerns aside, it is odd that an applicant with a four-year degree in an unrelated subject (such as philosophy) would qualify for a license, while an applicant with four years of investigative experience (one year short of what is required) would not. An applicant must also graduate from an accredited polygraph program. The nearest program is a 10-week (400 hours), $5,100, in-residence program in San Antonio, Texas.[5] Overall, applicants are required to have more education, training, and experience than paramedics (despite needing less skill and posing much less potential to do harm if malpractice occurs).

It is difficult to confidently conclude that the law’s true purpose is something legitimate rather than to intentionally restrict competition.

The 1889 Institute has published Policy Maker’s Guide to Evaluating Proposed and Existing Professional Licensing Laws. It argues that licensing an occupation, x, is justified if and only if:

Do the practices of polygraph examiners present a probable risk of significant harm to the public or patrons if practitioners fail to act properly?

None of what a polygraph examiner does is remotely physically dangerous. No intrusions, incisions, medications, or chemicals are necessary for a polygraph test, nor is any uncleanliness or discomfort involved. A polygraph test is about as unsafe as a hearing test.

But what about reputational or emotional harm? A polygraph business in Tulsa says on its website that “using a polygraph test to ascertain whether your partner is being unfaithful is considered reliable”.[6] What if a faithful husband took a polygraph test to prove to his suspicious wife that he was not cheating, but the test produced a false-positive? Such an error could ruin a marriage.

Such risks, though serious, are not at all mitigated by licensing because licensing cannot guarantee competency. Over and above that, even if licensing could guarantee exceptionally competent examiners, that would be no guarantee of dependable practice; contrary to the portrayals of Hollywood, the test itself is highly unreliable, even when professionally administered. The American Psychological Association has published extensively on the test’s low accuracy rates.[7] According to one University of Minnesota researcher, the test detects lies at a low rate of 65 percent and detects honesty at an even lower 50 percent rate.[8] That is to say, error is more likely with an honest examinee.

Distrust of the test is ubiquitous in federal and state laws and judicial rulings. The test is inadmissible in all military courts.[9] Federal law strictly forbids (most) private businesses from using the test as a hiring tool.[10] In 1998, the United States Supreme Court ruled that states may ban the use of polygraph tests in court, citing as support that the test’s accuracy rate is “little better than could be obtained by the toss of a coin”.[11] Many states (Texas and New York included) indeed have such bans. Other states admit the test as evidence sometimes (for example, if both the defense and the prosecution agree to it) but still only rarely—the test arguably violates the Federal Rules of Evidence.[12] As a further matter, in Oklahoma (and elsewhere), trial court judges act as evidentiary gatekeepers with the sole authority to decide whether a supposed expert is competent (and fit to testify therefore) regardless of whether he is licensed by the state.[13]

As it turns out, polygraph tests are not very useful for lie-detection but are somewhat useful for inducing gullible examinees to confess, which is why the test is so widely used in criminal investigations.[14]

Does a civil law or market failure impede patrons from accurately judging the competency of practitioners?

No. Patrons can easily reveal their experiences, and practitioners can advertise their skills and provide customer endorsements. Normal civil law can provide recourse for victims of severe malpractice.

There is no public-interest justification for licensing polygraph examiners. The Act should be repealed immediately. At the least, the Board should be allowed to expire on July 1, 2020.

Even if legislators insist that regulation is necessary, there are dramatically less burdensome yet equally (if not more) effective alternatives to licensing, such as voluntary, private certification. One such alternative has been outlined by the 1889 Institute.[15] At the very least, the requirements should be amended to be less onerous. For example, applicants could be required to do no more than pass a rigorous exam and perhaps also complete a supervised internship.