This paper breaks down facts about Oklahoma’s average teacher salary, considers how benefits might change generally-accepted teacher pay comparisons across states, cost of living, and inflation adjustments. Historical comparisons are also made, along with a discussion of facts regarding comparisons with other professions so that information on the issue is as full and accurate as possible.

Teacher pay in Oklahoma is higher than people think. That is the only possible conclusion when cost of living across the states is taken into account.

While it is true that Oklahoma ranks 48th in average teacher pay when raw numbers are compared, Oklahoma’s low cost of living makes a difference when the spending power of teachers’ salaries is compared. Only Mississippi has a lower cost of living than Oklahoma.

As shown in the table on back of this sheet, when average teacher salaries across the states are adjusted for cost of living, Oklahoma ranks 30th in teacher pay, well above Oregon, ranked at 47th. Oklahoma ranks considerably ahead of the two states that border us to the west, New Mexico and Colorado. Texas’, Kansas’, Arkansas’ and Missouri’s average teacher salaries rank higher than Oklahoma’s even when cost of living is taken into account.

Even though Oregon’s unadjusted average teacher salary ($60,064), ranks 12th in the nation and is $15,000 higher than Oklahoma’s ($44,921), the percentage difference is just 34 percent, not enough to make up for Oregon’s much  higher cost of living, which is 49 percent higher than that of Oklahoma.

In 2013, the average cost-of-living-adjusted salary of teachers in Oklahoma ranked below that of every bordering state, and Oklahoma also ranked 48th in average unadjusted teacher pay that year. Clearly, some progress at the local level has been made in paying Oklahoma teachers.

A $5,000 pay raise for Oklahoma’s teachers would place Oklahoma’s unadjusted average two spots behind Texas, which currently ranks 25th in teacher pay unadjusted for cost of living. However, with cost of living taken into account Oklahoma would rank 15th, just behind Texas, and second highest among our bordering states. Georgia would be the only southern state besides Texas to outrank Oklahoma.

A $4,000 pay raise would see Oklahoma paying more than every neighboring state except Texas on a cost-of-living basis. We would be 17th-highest in adjusted teacher pay.

Finally, it would take only a $2,100 raise for Oklahoma to rank 24th among the states in cost-of-living adjusted teacher pay, moving us ahead of Maryland, California, Massachusetts, and neighboring Missouri.

Note on Methodology: This analysis used a cost-of-living index calculated by the Missouri Economic Research and Information Center. The index has values ranging around 100, with 100 being the average cost of living in the nation as a whole. The index value for a state is that state’s cost of living as a percentage of the national average. Adjusted average salary values are calculated thusly: 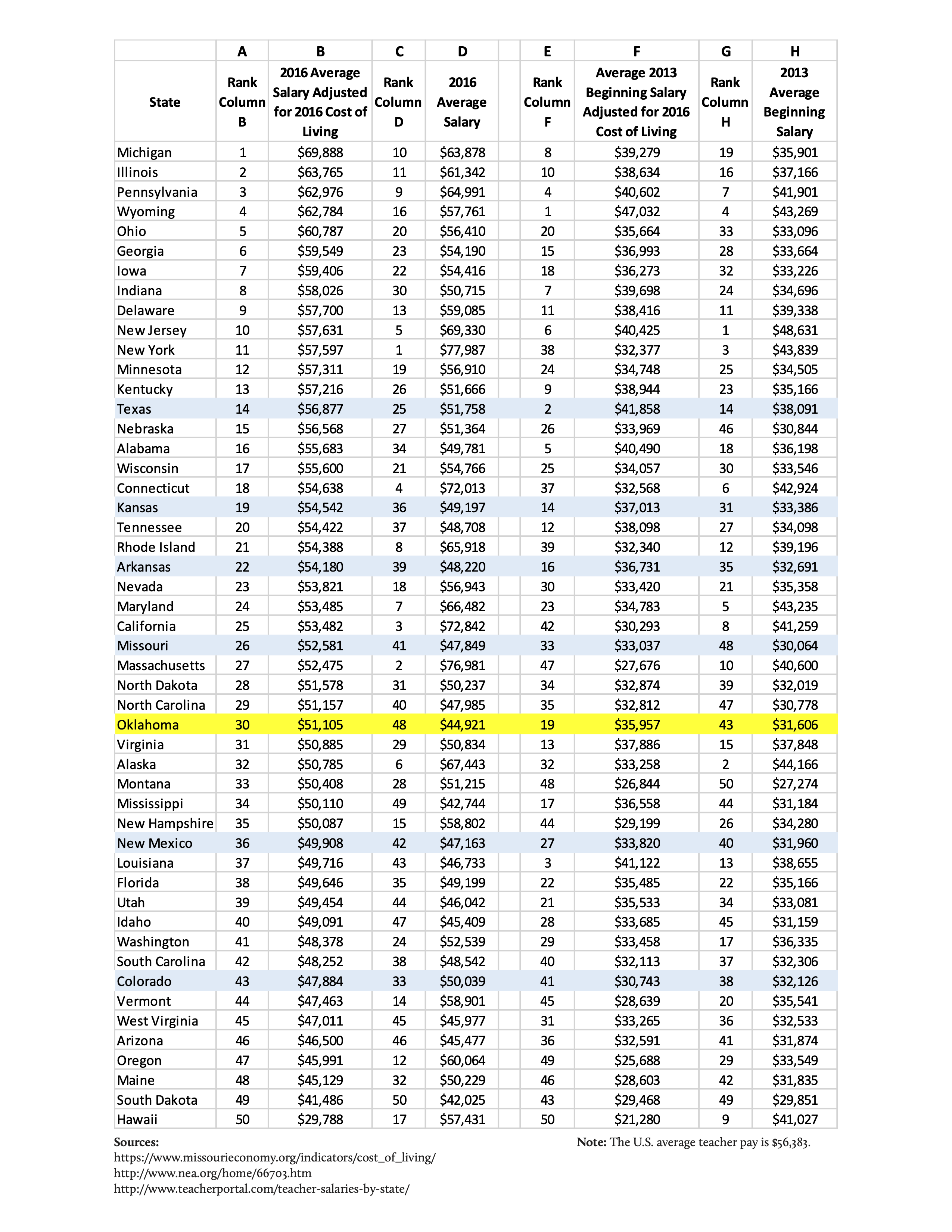